One of the most popular ways to make money online is by buying products and reselling them for more than what you paid. I’ve been an eBay seller (Power Seller Status!) for a few years now and have sold on Craigslist and internet forums too. Buying and Flipping is awesome, but if you don’t know what you’re doing it can be a money pit. So in this class, I’m going to go over the very basics of buying and flipping. I’ll have other classes later on eBay, Craigslist, Amazon, and internet forums individually. So sit back, open up Word, and take notes.

How Buying and Flipping Works

The basic gist of of buying and flipping is:

That’s really all there is to it. We don’t want to over-complicate things. Sell something for more than you paid for it + any associated fees.

Where To Get Products To Flip

The single most important part of buying and flipping is sourcing products to sell. This portion will make or break your flipping career. You have a bunch of different options for finding things to sell:

No matter where you’re getting your products from, they should have some key characteristics:

The reason why I recommend buying small and light products is because heavier items cost more to ship and can be a bitch to lug around. With small light products, you can quickly package them up and the cost to ship will be a lot more reasonable. As you become more experienced with shipping items and if you feel the need for it, you can go with heavier items. Personally, I shy away from anything I need two hands to pick up.

I threw the second tip in there because I have seen soooooo many people think they will make a $50 profit on something they bought for $100 and sold for $150 on eBay. I wish it were that easy. But after you deduct eBay and PayPal fees (a combined ~13%), you’re already down to $30 profit. Then you have to ship the item which can cost $5-10 depending on the weight and carrier you choose. You could end up making about $10-20 on that flip. An that doesn’t even factor in your time. The point of all this is that you have to make sure you calculate your COGS when you source products. 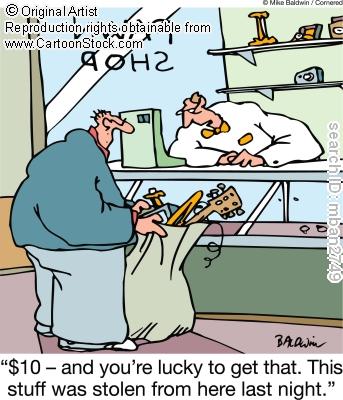 If something is stolen or counterfeit or stolen, you shouldn’t be selling it, PERIOD. It can be very tempting to sell bootleg Beats By Dre headphones or Nike accessories. But it’s illegal and a pretty screwed up thing to do to someone. Selling stolen products is also illegal and should be avoided. Don’t pull the old, “I didn’t know it was stolen” routine. There’s a difference between getting a good deal and buying something obviously stolen. Buying an iPhone 4S with a cracked screen for $100 because the seller doesn’t know how to fix it is a deal. Buying a like new iPhone 5 for $100 off Craigslist is an entirely different story. At that point, you’re pretty much fencing. Use common sense.

Buying broken items, repairing them, and reselling them is actually how I first started earning money with eBay. I bought broken iPods, repaired them and resold them. Refurbishing items can be very lucrative but it’s also a little risky. I’ll make a post on this later, but some of the issues you could run into are:

Lastly, always make sure that there is an actual demand for the product you want to flip. There are some things that just won’t sell. You’ll end up holding onto the stock for a long time. I learned this lesson with some T-Shirts I bought thinking I would sell them on eBay quickly. I still have about 100 of them left from over a year ago. Now I look for products that I can sell within a month at the very most. One of the best ways to check this is with eBay’s Completed Listings feature. This feature lets you see listings that have ended. You can use Completed Listings to find out if a product is selling, the average selling price, and a lot of other useful information which I’ll cover in another post.

After you buy your products, you’ll need to sell them somewhere. I’m going to go into detail on each of these in separate classes because they’re all a little different.

Sure there are other options like having garage sales, going to swap meets, and other things. But since this site is primarily focused on using the internet, that’s where I’ll be placing most of my focus.

You all know eBay. It’s primarily known as an auction site but you can also sell products for a flat rate and open up your own eBay store. Even though I’ve had a lot of success with eBay, I’ve started to use it a lot less because I don’t agree with some of their businesses practices. Let’s just say they are very “Scammer Friendly”. But anyhow, I do have a good bit of knowledge of how to sell on eBay and will share it with you. Here’s a post from someone on a forum that screwed by eBay. And the guy from this video had to take things into his own hands after being screwed by eBay/PayPal.

Craigslist is a local market place. All transactions are (or at least they should be) handled in person. I have plenty of tips for selling on Craigslist. I like Craigslist because its not nearly as risky or as much of a headache as eBay can be. If you want to sell on Craigslist, be prepared to receive a lot of low-ball offers. Some cities also have local classified sites or Facebook groups. The easiest way to find yours is to Google something along the lines of [“City Name” classifieds].

Amazon is really seen as an alternative to eBay for a lot of people. Personally I don’t use it and I will probably seek someone to make a guest post (Substitute Teacher!) about selling on Amazon because it’s not my area of expertise. So I will leave this one alone for right now.

When I first started buying and flipping, I was selling on an internet forum with a very active classified section. This is actually more risky than eBay. With eBay, if a deal goes bad, there is at least some recourse (not much, but at least a little bit). However, internet forums don’t have the infrastructure that eBay or Amazon has because most of them are run by hobbyist. There is no Resolution Center. You’re basically forced to resolve issues yourself like the guy in the video above. I have definitely been scammed once through a forum. It’s a risk you take but forums can be a great place to flip.

This class covered the basics of buying and flipping. I’ll have individual classes that go more in depth on topics like collecting payments, creating listings, and how to sell on different sites.